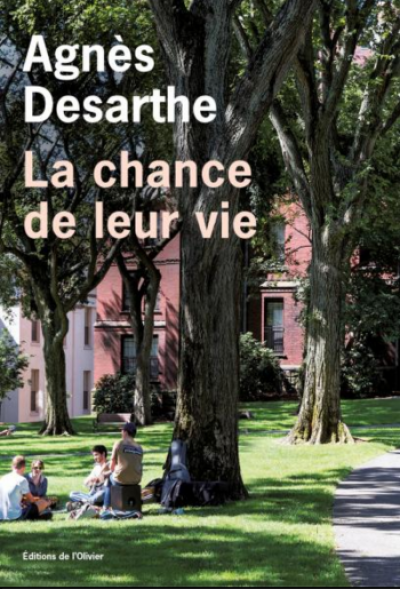 The campus novel invented by English-speaking writers made a splash some years ago, with Duke providing more than the décor.  In Changing Places (1975), David Lodge creates Morris Zapp, a globe-trotting professor of literature resembling Stanley Fish who transformed the English Department during the 1980s-90s. Now it’s the turn of a writer in France, Agnès Desarthe, whose novel, La Chance de leur vie [Editions de l’Olivier] is just out.  The scene is Earl University, in North Carolina, and the scenario, a French professor of literature invited to campus to teach for a year.  The opportunity could not come at a better time for this character, who leaves Paris with his wife and son in the months before the 2015 attacks, primed to discover the strange new world of an American university.

Reading this novel is like putting on a pair of bifocals: first you’re perceiving American habits and prejudices through French eyes, and with a second take, you find yourself observing French foibles and presumptions through American ones.   Saying this makes me jump because this novel offers a short-hand version of sorts – precise and humorous – of what I’ve been doing professionally for years.  Bi-cultural vision is a way –of-life.  Desarthe puts it to the test by writing in a comic vein that gets you looking again at what you thought you know and seems familiar.    Her story of a ‘semester abroad’ nudges you towards recognizing some attitudes just plain don’t make sense.  They don’t belong to ‘other’ people; they are your very own.  The zany satire of this novel has the most zing when that insight hits home.

Sex and religion are two of Desarthe’s foolproof topics.  In the love-hate affair between French and American cultures, it is difficult to skirt the first subject.   Desarthe is as familiar with the cliché of the ‘puritan’ attitude on this side of the Atlantic as any writer.  With farcical voyeuristic scenes in Duke Forest, she gives it an unexpected twist.  Her vision is as different as can be from Tom Wolfe’s caricature of hooking up at Euphoria State, the Triangle campus where he sets his novel, I Am Charlotte Simmons (2004).  Desarthe’s scenes are especially playful, placed in a university department of Romance Studies. For anyone who knows anything about such groups, the fun is irresistible although we often forget how to laugh.  Her satire registers in a flash.  As administrators often put it: what exactly do you do with ‘Romance?’

Religion is no less a source of wit.  Many readers will be waiting to uncover a fault line running through the novel between fundamentalism, American style, and laïcité – that French brand of secularism, the same line redrawn in classroom discussion, and debated in the blogosphere – no matter what the religion.  Once again, Desarthe surprises.  She takes full advantage of Duke Forest where she imagines a séance, organized by the teenage son named Absalom space Absalom [hats off to Faulkner].  No ouija boards are passed around among the believers, but there sure is a lot of praying, and a few smartphone tricks.

Ultimately, both sex and religion are raw material for Desarthe’s fiction, her best ingredients for probing its limits and testing our credulity.  What is more unbelievable?  A French kid getting religion in the land of the prosperity gospel?  An American woman stumping for Trump?  Or for that matter ‘foreign’ literature being taught in North Carolina?

Whether you answer or not, with a smile on your face or not, this novel keeps you guessing.  The adventure it offers is delicious.  The provocation it conveys, profound at times as well.

On the first page, as the family takes the chance of winging its way to North Carolina, the teenage son, Lester aka Absalom space Absalom states:  we’re going to die.  Desarthe starts her fiction with this fact at 30,000 feet.  It’s one we resist as a rule and spend a lifetime avoiding.  It’s a fact too that came home to many in France at the time of the 2015 attacks, as it triggers so much fervor and soul-searching in the States.  In her inimitable way, Desarthe turns this fact inside out to make something moving in a playful key.  Her fiction creates an ultimate gamble.  No matter where you come from, and what is happening, you get one ticket to ride.   The teenager explains it well: “the Bing Boum is the opposite of the Big Bang because it’s the end of the world, when there’s no thereafter”…

When fiction starts there and carries on in that style – we’re in for a real story.

Desarthe visited Duke one time to work with students and faculty in 2010.  I could not have anticipated how such an encounter alchemizes in the prose of an original writer.  As we begin another academic year, listening to Desarthe’s narrator is a gift because her voice combines common sense with an understanding of the lunatic and unpredictable choices that shape our lives – in all the worlds we inhabit.