A Practical Way to Learn a Language, and a New Perspective 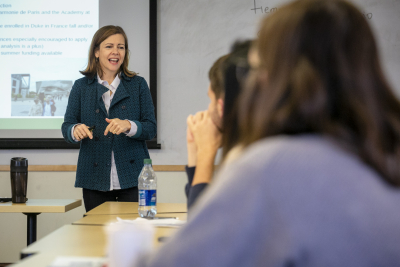 No matter what you’re studying, there’s no escaping the role of language. It’s just how humans communicate. Yet, there is a generation of students whose experience with language classes consists almost entirely of conversations about a single subject: travel.

“Language used to be taught in a contextual vacuum,” explained Deb Reisinger, an associate professor of the practice of Romance Studies. “When adults think back on learning a language, they often recall memorized dialogues, role plays or skits where they dressed up as a waiter, or content very unrelated to their life. And the learning goals were often geared to the privileged few who were able to jet off to Paris or Italy for an extended vacation.”

Language pedagogy has come a long way from that approach, but a program at Duke is trying to push it even further. It proceeds from a simple premise: Let’s see what happens if we build language learning into other classes.

Cultures & Languages Across the Curriculum (CLAC), founded in 2014, is a program that supplements Duke’s language departments by offering students the chance to take classes from other departments in their target language. Some classes, like Romance Studies’ Soccer Politics, are full classes that have English-language lectures and discussion sections that take place in different languages.

Other CLAC courses are half-credit tutorials graded on an S/U basis, planned in parallel with a class from a different discipline. Students are encouraged, but not required, to enroll in both. For instance, in fall 2020 students can choose to take the CLAC course Voices in the Environment in French, Chinese or Spanish; its partner class, Integrating Environmental Sciences and Policy; or both.

Designed to offer a space for intensive conversational practice and expanded, specialized vocabularies, CLAC courses fill a niche for students with busy schedules. “We have a four-semester language requirement to get into CLAC,” explained Reisinger, who directs the program. “These courses are for when you’ve finished your language requirement and may not have time for any more language classes, but you want to keep up your language skills. Or you’re a native speaker and you’re tired of always speaking in English—you can feel so much more empowered to just use your own language to study another field.”

More than just the language skills, CLAC helps internationalize curriculum in all of its disciplines. Each of its courses utilizes primary materials in its target language, including perspectives and issues that may be missing from an English-only class. “We’ll look at environmental racism from the Parisian perspective, or biodiversity in West Africa,” Reisinger said. “If we turn to study what’s being produced in other languages, we see that there’s much richer information available that enhances our understanding.”

To augment that aspect, there is a “social justice piece underlying a lot of the work in CLAC,” Reisinger said. The classes are planned to be flexible so they can react to real-world events as they happen. “The Voices in Public Policy course, which is taught in Spanish, has shifted semester-to-semester based on what is happening in local Latinx communities,” Reisinger said. Students connect with local organizations around their work on DACA, voting rights and other ongoing public policy questions.

The approach helps attract students fluent in other languages who may not take language classes—like native and heritage speakers—which creates unique experiences. For instance, French students are able to learn with native speakers from Haiti and second-generation French immigrants. “That’s really exciting for us,” Reisinger said. “We’re getting a different population. CLAC courses also offer our language students a bridge to the disciplines that they’re studying.”

A similar effect comes from another initiative Reisinger runs, the Duke-UVA-Vanderbilt Partnership for Less Commonly Taught Languages (LCTLs). Each partner university has a specialty in a language most universities don’t offer—Haitian Creole at Duke, Tibetan at UVA and K’iche’ Maya at Vanderbilt—and students from all three universities can enroll in any the languages. The diversity of culture and perspective within those languages helps deepen Duke’s other offerings.

“Duke students are very professionally oriented, so that was part of our goal” in expanding Duke’s language learning opportunities, Reisinger said. Most language majors are actually second majors, so programs like CLAC and the Partnership for LCTLs “help make those connections [between language and their primary majors] a bit clearer.”

Reisinger’s previous CLAC students have gone on to work in international development in Africa and Haiti and written theses on maternal outcomes among Francophone refugees before starting medical school, among other things. A student who studied Creole through the Partnership for LCTLs was the first person to write an honors thesis in the language at Duke.

Especially while international travel is limited during the COVID-19 crisis, programs like these ensure students can maintain an international perspective in their work. This year, Reisinger will begin a new position as Director of Language Outreach Initiatives, overseeing both CLAC and the Partnership for LCTLs. Reisinger said she hopes to expand both programs in the coming years. CLAC courses almost always have to turn students away, she said, and she is exploring partnerships with other universities to add new LCTLs.